In attendance to watch the Aspire Academy graduate play were eminent personalities including the President of the Qatar Tennis Squash and Badminton Federation (QTSBF) HE Nasser Al Khelaifi and other officials of the federation.

Tamimi could have rounded up the match in the fourth game, but some unexpected errors from him allowed his 52-ranked English opponent to bounce back from a 4-7 deficit to take the game to a decider.

Energized by the presence of the supportive home fans, Tamimi, who reached the Round of 16 at last year’s PSA World Championships held at the same venue, wasted no time in putting the game to bed in less than 10 minutes of the deciding game. 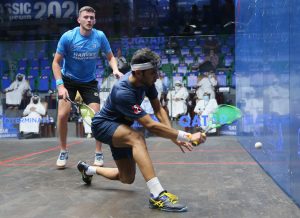 “The effect of lack of matches was reflected in my game today,” Tamimi said of his sloppy performance, especially in the fourth game.

“It is tough playing here every time as I have to raise the level of my game each time I play as I want to make my country proud. After a great performance here last year, I’ve had a lot of pressure coming into this tournament especially with the lockdown we’ve been having due to COVID 19. I haven’t had any matches since February in Chicago. I only played only one match against Tarek (Momen) in Manchester, and when I came back, I had to do two weeks of quarantine which means that work went for nothing,” he said.

Tamimi who will face Diego Elias of Peru in his next match added that he would have to raise his game and play a lot better than he did today against the World No.7.

“Diego and I are terrific friends, and I’m looking forward to our match, which I think will be interesting and entertaining for everybody.”

Tamimi has a 3-0 head-to-head advantage over his Peruvian opponent and going by his antecedence; another victory seems to be in the offing for the 25-year-old Qatari player.