The defending champion and World No.1 Ali Farag wasted no time in dispatching England’s Richie Fallows in the fastest match of the tournament till now as he advanced into the third round of the Qatar Classic 2020, a World Series Platinum event, on Tuesday.

Egypt’s Farag, who reclaimed the No. 1 stop early this month after clinching the CIB Egyptian Open, was challenged by his 25-year-old opponent in the opening two games with the Londoner finding some good shots and making the scoreline close in each. However, Farag was able to remain clinical towards the end of each game to take a 2-0 lead. 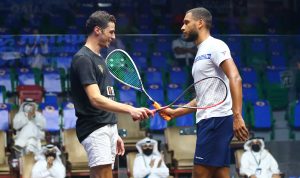 “The Raptor” then looked completely at ease in the third, taking the ball well on the Glass Court to draw the curtains on the one-sided contest.

“We’ve never played before, but I know how talented Richie is,” said Farag in his post-match interview. “This is a unique court in a good way in that it takes the ball in very easily, so any bad shot and you’re penalised immediately. All credit to Richie he played really well. In the first two, I couldn’t really find my range, and in the third, I was happy I was able to find the corners I intended to.”

Speaking about his next opponent, Yow Ng, Farag said, “He is another guy I’ve never played before. What a promising talent he is, World Junior champion and he has been knocking on the door for a while now. He is based in Bristol and is playing well, you could tell from his win today against a great player like Declan James, so I will have to watch his match and hopefully I will be ready.”

The Egyptian player noted that he has always been comfortable playing in Qatar.

“We need nothing here, the Qatar Squash Federation always does a great job of making us feel comfortable, and there is nothing else you need other than thinking about your squash.”