Three times they had met, and three times Qatar’s Abdulla Al Tamimi ended up on the winning side against Peru’s Diego Elias, the World No. 7.

Things were, however, different on Tuesday at the Qatar Classic 2020 as the pendulum swung in the direction of the 24-year-old Peruvian. Elias posted a convincing straight games (11-9, 11-4, 11-8) victory against the World No. 30 Tamimi in their second-round encounter to book a place in the last-16 where another South American, Colombia’s Miguel Rodriguez, is waiting in the wings.

“We’ve played all of our lives. I think the first time we played, I was 14 and he was 16. We played a couple of times in juniors, and he beat me there also, it’s the first time I’ve beaten him here,” Elias said. “He is really hard to play, he has so many different shots from the front, and I never know what he’s going to do. It’s tough for me, we’re excellent friends too, so I’m really sad about what happened, and I hope he has a quick recovery.” 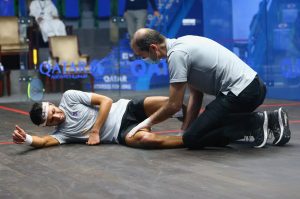 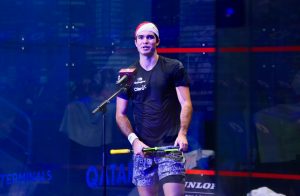 Elias easily took the first game courtesy of too many tins from Al Tamimi, thereby handing the game to the patient Peruvian.

The second game ended up even much better than the first for the ‘Peruvian Puma’, a quarter-finalist at last month’s CIB Egyptian Open, as he found his accuracy and length well to quickly double his advantage with Al Tamimi struggling with his movement.

Al Tamimi had to take an injury break in the third after he slipped whilst retrieving the ball in the front left and required physio treatment. He came back onto the court to see out the match, but it was simple for Elias to close out with Al Tamimi unable to move position due to a hamstring strain.