Egypt’s World No.12 Fares Dessouky booked his place in the last-eighth of the Qatar Classic 2020 with a dominant performance which saw him claiming a straight-games (11-2, 12-10, 11-2) victory over the former World No.5 Borja Golan of Spain in 34 minutes.

With the victory, Dessouky will face either Mohamed ElShorbagy or Youssef Ibrahim for a place in the semi-finals.

A confident-looking Dessouky quickly took the first game for the loss of two points after controlling the middle of the court and condemning Golan with his accurate hitting. 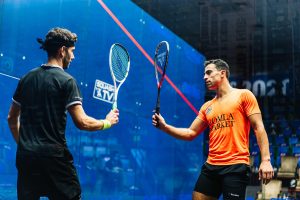 The second, however, was a bit tougher than expected for the 26-year-old Egyptian as his Spanish opponent closed an 8-1 deficit to take the game into a tie-breaker before he eventually managed to close it out 12-10.
With the lesson learnt in the second, Dessouky ensured the third game didn’t go the way of the previous as he took no prisoners this time around, closing the game within eight minutes as he marched into the quarter-finals.

“He’s a very good player. Very talented and dangerous as you could see in the second game, I was leading 8-1, and then he came to 9-9. Maybe today, it’s my day, and he had a very good career, a great player. I’m really glad I’m through. The court was a little dead, and it suits my game more, I think,” said the elated Dessouky after the match.