Mexico’s Cesar Salazar was forced to withdraw from his Round 2 clash with Egypt’s Youssef Ibrahim, the World No.41, due to injury in what was turning out to be one of the most entertaining matches of the day on Monday.

The first two games were equally shared between the two players, and the fans were enjoying the exciting action on the Glass Court before the World No.21 Salazar slipped whilst lunging into the front left corner at 10-10 in the third. He was unable to recover, thereby handing the match to Ibrahim. 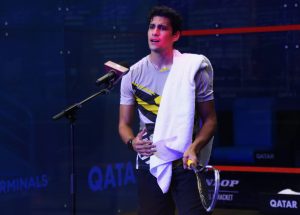 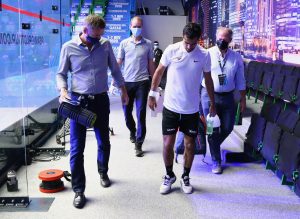 “I thinook me by surprise in the beginning. He was going short way too soon, and it caught me by surprise. The court here is deadly, you get your rewards if you hit a really good length or boast, I think he adapted to the court much faster than I did,” said the 22-year-old Ibrahim. “It was a bit of a scrappy match, but we are just using the advantage of the court as much as we can. I’m feeling really sorry for him, it’s a horrible way to win, but I remember last year I sprained my ankle in one of the matches.  I’m sure he will get back stronger,” he added.

Ibrahim will now feature in the last 16 of PSA Platinum event for the second time in a row after last month’s CIB Egyptian Open after being awarded a 3-1 victory due to Salazar’s withdrawal.